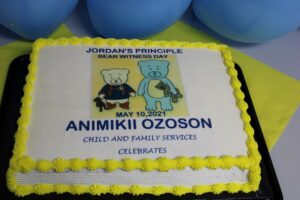 As a precautionary measure, please be advised that effective March 17, 2020 our office will remain closed to the public until further notice. If you need assistance please contact your case manager or reception at (204) 944-0040.

The staff at Animikii Ozoson Child and Family Services is having a “Bear Witness” party to celebrate and provide awareness to Jordan’s Principle.

The bears are ready to party!

Ms. Lavallee brings a wealth of knowledge to this position. Trudy has worked in a multitude of First Nation social program and policy areas associated with First Nation child and family services in Manitoba, both levels of government (including First Nation), the non-profit sector and in the Winnipeg urban community with Indigenous peoples and stakeholders over a span of 30 years.

Ms. Lavallee is well respected for achieving credibility in the community, Province of Manitoba, and across Canada, particularly for her advocacy and mediation work with First Nations children and their families involved in child welfare and jurisdictional reform. Her work has been the impetus that has resulted in success and great strides in Canadian policy for First Nations children, youth, families, and communities.

Trudy started her career in social services in Thunder Bay in the mid-1980s as a support worker in Indigenous group homes. Upon moving to Winnipeg  in 1987, she was a foster care worker. Trudy also worked extensively with the Manitoba First Nations leadership of the Aboriginal Justice Inquiry – Child Welfare Initiative, combined with ongoing advocacy for First Nations children and families.

Ms. Lavallee is a First Nations member of Kiashke Zaaging Anishinaabek First Nation (AKA Gull Bay First Nation) in Northwestern Ontario, Robinson Superior Treaty. She grew up in Thunder Bay and on her reserve. Trudy is a graduate of Lakehead University where she achieved an Honours Bachelors of Social Work Degree. She was also a member of the Canadian Armed Forces in the Canadian Naval Reserves as a medical assistant.

Over fifteen years ago, as one of the founding board members of Animikii Ozoson Child & Family Services, Ms. Lavallee was instrumental in the mandate and early capacity development of the agency to better service the needs of First Nations children from Ontario residing in Manitoba. Trudy holds strong conviction for the integrity of Animikii and is committed to protecting the inherent rights of Indigenous children and their families residing both in Ontario and Manitoba. She is a proud mother of two grown daughters.

Ms. Lavallee began her duties as Executive Director as of Monday, March 11th, 2019.

It is with some sadness I write to inform you of my decision to retire as Executive Director on January 31, 2019; I will definitely miss you.

Over the years I have come to know you and your families and will miss seeing you at our events or in the community.  Many of you have taken the time to call, write or just stop a moment to share the news of your family or changes in your own lives.  I have always felt very honored to receive these gifts.

For foster parents who give so selflessly and from your heart I say Chi Miigwetch/Thank You for stepping in to provide care and nurturing to our little ones until they can be reunited with family or community.  I know it is not easy to let go when you open your heart but many of you have shown great strength and courage by choosing to walk alongside us in support of our families.

For our youth in care,  I will miss watching you grow.  It has been one of the joys I have received watching you navigate a tough system and not give up on your goals.  I know you will always be welcome at Animikii.

Thank you for trusting us to be part of your journey.

Wishing you all a safe holiday season and all the best for 2019.